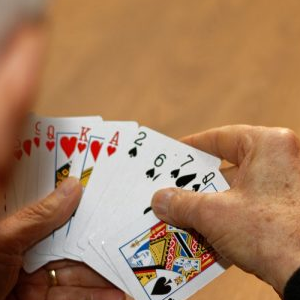 Canasta is a card game that can be played in a variety of ways and is a lot of fun, but it may be hard to master. The purpose of these instructions is to walk a player who has never played Canasta through the game.

Due to the fact that a complete game of canasta may run-up to an hour or more, it is an excellent game for socializing with smaller groups of people. Continue reading to learn about the thrilling card game’s rules and how to get started playing it.

Canasta’s broad appeal may be attributed, in part, to the fact that it has wild cards.

They increase the game’s potential for high scoring and provide an element of surprise.

Canasta is one of the few partnership games in which the players are able to cooperate with one another.

This is despite the fact that the game may also be played very well with two or three players at a time.

The following items are required in order to play Canasta card game:

Your objective is to rack up more points than the team or players you are competing against in order to win. In order to get points, you must combine cards and try to make as many canastas as you can. Take the following actions to get a game of canasta underway:

Card Values, Canastas, Red 3’s, and Going Out are the four different methods by which you may earn points.

The difference in value between melded cards and unmelded cards determines who wins the game and how many points they get.

In addition, every red three is worth an additional hundred points. If, on the other hand, a team has all of the red 3s, they will be awarded 800 points.

Additionally, an extra one hundred points are awarded to the group that successfully completes the round.

When playing Canasta, the goal is for your team to amass 5000 points before any of the other teams. Once this goal is reached, the game is officially over and the team with the most points wins.

If a player still has a red three in their hand after placing their melds on the table, they are required to immediately put the red 3 on the table as well.

The first meld that a player creates must have a certain minimum value, which is determined by the current score of the team.

If a team’s total score is between 0 and 1499, each player’s first meld must be worth at least 50 points.

In order for a player to contribute to a team score between 1500 and 2999, their first meld must be worth at least 90 points.

A player’s first meld must be worth at least 120 points for the team to have a score of 3000 or above.

If a player chooses to throw away a wildcard, the discard pile may become unusable (that is, no one will be able to pick cards from it).

Unfreezing the discard pile requires a player to be able to complete a natural meld using the card that is currently on top of the pile.

How do you keep score while playing Canasta?

The score has to be written down on a piece of paper that has been cut into two sections, one for each competing team.

How do you form a meld while playing Canasta?

Matching cards of the same rank results in the creation of melds. At the very least, three cards are required to initiate a meld.