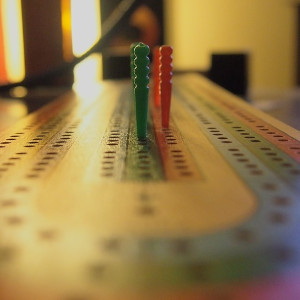 The goal of cribbage is to reach 121 or 61 points first. In cribbage, cards are rated from highest to lowest, with Kings being the highest and Aces being the lowest. Cribbage, unlike other card games, is played on a board with pegs.

On the Cribbage board, the players’ three pegs start at 0. To choose who will be the first dealer, the deck is shaken, and each player chooses a card at random.

The first Dealer is the player who has the lowest card value.

After that, the Dealer distributes six cards to each player. A crib is made by each player discarding two cards.

Players usually have two pegs. They score points in the three rounds of Peg, Counting, and Crib to advance their pegs ahead on the board alternately. So let’s dive into each one to see how to play them:

To reduce the hand to four cards, each player looks at their six cards and lays aside two of them face down.

The crib comprises four cards put on top of each other. The dealer gets to count the points in the rib after their own hand, during the counting round. One difference is that, in the crib, a flush can only score if it includes the beginning card.

The non-dealer shuffles the remaining deck and chooses one card at random for the Counting and Crib rounds. It’s essential for keeping track of the order in which cards are dealt in order to assess whether a “foreign card” has disrupted what appears to be a sequence or a run.

The order to count the three hands when the game is over is non-hand dealer’s first, dealer’s hand second, and crib third.

The combination is essential because, at the end of a game, the non-dealer can “count out” and win before the dealer can count, even though the dealer’s total would have been higher than the opponent’s.

The following are the fundamental score combinations:

The subject of how to win plagues, everyone, learning to play cribbage. Everyone knows that making 121 or 61 points first will make them the winner. But it requires skill and technique. So, here are some pointers:

The game has a long set of rules. The rules in this article mostly apply to the two (2) player cribbage game. So let’s delve into the rules:

Cribbage’s longevity is undoubtedly owing to the fact that the rules have stayed virtually unchanged since the 1600s. During this period, though, the game has evolved into various variations of itself. These variants are listed below:

Which age of people can play Cribbage?

Cribbage is a game that everyone can play, regardless of age, because of the various variations available.

What is the best variant to start as a novice player?

Five card cribbage is the best for novice players as it is the simplest of them all.

What is the most popular Cribbage?

Two player cribbage is the most popular and commonly played version of it.