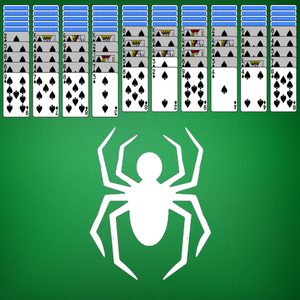 Spider solitaire is one of the most popular varieties of card games. The name was derived from the fact that a spider has eight legs, and spider solitaire had eight discard piles to be filled.

The game was first introduced in 1949, and it instantly became very popular among solitaire players. With time, the rules of the game changed. At first, the game required a player to make eight stacks, each of 13 cards.

The same still applies to the old versions, but newer versions changed the rules because they were too challenging.

The varieties were added to accommodate the different suits in playing cards, which simplified the game and increased playability.

Differences Between Solitaire and Spider Solitaire

Spider solitaire, on the other hand, may or may not use all the suits.

The difference is in the difficulty level that the player chooses.

The less the number of suits used, the less challenging the game will be. Card sequencing is also a bit different in spider solitaire.

For most card games, the player gets to arrange the cards in descending numerical order.

Another significant difference is the stock. For the standard solitaire games, the players can only deal one card from the stock whenever necessary. For spider solitaire, however, a draw from the stockpile means additions of cards to all the eight columns.

One of the benefits of that is that the player gets more cards to work with for the next play.

A significant disadvantage, however, is that the dealt cards will cover the already-established sequences, which means having to move some of the cards to reestablish the sequences and build upon them.

One of the most frequently asked questions concerning spider solitaire is what the mathematical probability of winning really is.

For example, the player might have the option of undoing moves, which changes the winning chances.

The percentage of winning chances can only be determined if the rules stipulate that the player cannot undo moves or restart the game. The player also has to play every presented game.

Another thing to note is that the number of winnable games depends on how one defines winnable.

For example, winnable games, for a player who often undoes moves, may be defined as the percentage of games that the player is expected to win if all the gaming factors are favorable to him.

That is irrespective of how improbable that may be. A majority of spider solitaire players usually have that idea in mind.

A downside to factoring in winnable games is that there may be a chance that one move may influence the probability of a victory.

Without the player attempting the game, determining whether a game is winnable may not be possible. Keep in mind that some games may be impossible to win based on the cards dealt.

Contrary to what many people think, spider solitaire is not solely based on luck. There is an element of luck for a player to win, but skills and strategy do play a significant part in it.

The level of skills that you will need to win a spider solitaire game will depend on the difficulty level that you play.

Luck only goes to the extent of the cards that the player is dealt with, which may influence the strategies that he or she should use.

To increase the chances of winning, a player should start by trying to build sequences of cards.

He/she should also try to expose the face-down cards to empty the tableau piles as quickly as possible.

Building on the highest-ranking cards first and getting as many cards as possible exposed and arranged in order of suits before dealing again from the stock also increases the chances of winning.

The earlier you eliminate a column of cards, the higher your chances of winning become.

Just like any other card game, the game of spider solitaire is bound by rules.

The rules vary slightly based on the level of the game, but the main objective is similar across all levels.

The first rule is that you need to arrange the cards only in descending order, with the king being the highest card and ace being the lowest card. E

ach stack of the king to ace is removed from the columns. You get to win the game if you manage to clear all the columns.

Spider solitaire is played using two decks of cards but without the jokers. The total number of cards is, therefore, 104. A game ends when the player cannot turn any more cards or clear any column.

The player can deal more cards at any time, but it is recommended that he/she does so when there are no more moves to make.

For scoring, the official spider solitaire system starts with 500 points. One point is deducted each time the player moves a card.

For a spider solitaire game that has an undo function, the point remains deducted even when the player undoes a move.

Where to Play Spider Solitaire

The set up for playing spider solitaire is quite easy. All that is needed is two sets of playing cards. One of the advantages of the game is that it is meant for one person.

For two players, one player would have to assume the role of regulating and ensuring all the game rules are followed

. A player can also play the game online or from any of the many online casinos that offer solitaire games. It is a fun game that anyone can enjoy during their free time.